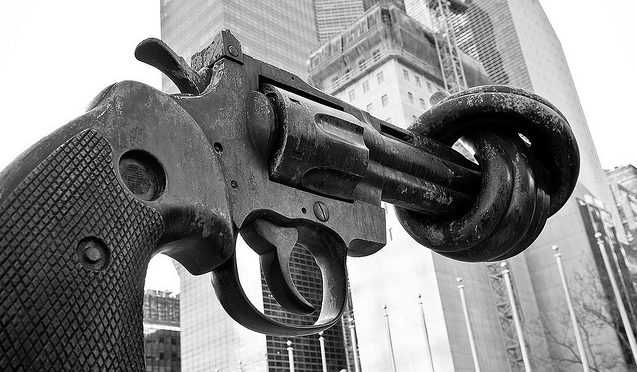 But what is overlooked by these bright politicians and the people they claim to lead, is the mere fact that this is not just a scenario, not just an option for tomorrow, but that this is America’s reality today; America is already at war with itself, and the weapons used are guns. At the heart of this war with itself, is ignorance: Ignorance of the American people and of the American government of their own dark side and their destructive powers.

I have just immigrated to the US and have actively chosen to do so, because I still believe in the USA and in my own ability to thrive in it. The one issue that makes me seriously re-consider my move is the willful social, cultural and political ignorance about America’s position to condone murder, and the rule of fear associated with it. For it is that what is the result of the US gun laws.

Beyond the news of today, yesterday and the day before that of random murder here, there and everywhere in the US, the following scenario makes us consider the magnitude of the potential threat the US second amendment poses for its society:

“What if a ban was introduced and Americans were called to hand in their guns, like has been customary throughout history in the rest of the world?”

Considering the fundamentalism with which some Americans hold on to their weapons and the outdated charter that they use as the sole scripture to support their monomaniac believes – the second amendment of the US constitution – the chances of resistance, armed resistance is real. Armed resistance in this case means civilians taking up their guns against the police that will have to collect those guns and will be the only lawful owners of guns. This means some form of serious civil strife, if not war.

The reason this is such a scary thought is because not only the true nature of the American people, but rather the true nature of the American government and primarily its police force will be put to the test. And the picture of the US police force is not a pretty one. It is one in which militaristic practices have become an integral part of daily conduct against civilians. The situation has deteriorated to the extent that fear for the government and police force is the most prominent basis on which the US government continues to function, with police brutality being seen as a necessity and policemen being trained both on and off the streets to show zero tolerance to the citizens they are supposed to protect. The most prominent reason and excuse for this outrageous behavior being their own fear of civilians pulling a gun on them.

Although this thought experiment indicates that the risks associated with a ban on weapons is real – reason enough beyond sheer political opportunism to keep enforcing the dogma on gun bans – the US continues to  condone guns. The continued silence and ignorance over this issue is even more dangerous, as another scenario indicates:

“What if the economic crisis continues and at some point larger parts of the American people will not be able to feed themselves and indeed áre existentially threatened?”

People, beyond the strayed lunatic will start using the means at their disposal. These means being guns, they will use the guns deadly power to stay alive, for bread, rather than for homeland.

“What if the first two scenario’s conspicuously mingle? What if a gun ban is enforced and at the same time people don’t only feel, but also are existentially threatened?”

Another black scenario as of a sci-fi movie unfolds. A fight of scattered groups fighting against each other and a government that is not able to keep unity, but through repression of its people. This scenario is a bleak and threatening one. It’s the scenario American politicians are so afraid of and it is the deeper reason that Americans keep holding on to the little they have: their guns.

But what is overlooked by these bright politicians and the people they claim to lead, is the mere fact that this is not just a scenario, not just an option for tomorrow, but that this is America’s reality today; America is already at war with itself, and the weapons used are guns. At the heart of this war with itself, is ignorance: Ignorance of the American people and of the American government of their own dark side and their destructive powers.

The people’s ignorance of their own dark side is based on the faulty and dangerous belief that ‘we the people’ can control  the deadly power of guns by mere faith in the second amendment. The government’s ignorance of its own dark side is based on their ignorance of the fact that their own police force is not a force protecting its people against itself, but rather ruling it by the fear of itself. A government based on fear – so does history and the grand American saga tell us unanimously – is inherently instable and has indeed made the fabric of American society unwind already.

This is the reality of the USA today.  America’s gun laws are the dark side of ignorance of this country’s self-image of exceptionalism – An exceptionally flawed, foolish and self-destructive image based on mere ignorance. A dark side that will become stronger with every killing, every unnecessary murder. And with the counter adding up deep into the thousands a year the dark side is taking over.

For me as a foolish recent immigrant it is only the belief that America can indeed turn itself around as no other country can – the bright side of American exceptionalism – that gives me hope that there is still a check to balance out the deadly powers of the American condoning of guns. The American government and its people have to see the real threat of guns to their own dreams and lives, and act now, if not to keep their own, then to keep a recent immigrant and his dreams of a more perfect union, alive.

This blog is to capture what until now was transitory, lost in the grey: Images dissipated like ghosts in the night will be manifested in brought day, beamed out in virtual light. And words once cluttered and stuttered, will be uttered, as long as I have a say.